Istanbul attack Turkey must end blame game and look for solutions. via ...

This leaves me deeply worried about Turkey and its ability to stymie further terror attacks through the vigor of its institutions and unity of its citizens.

Including last night's attack on a nightclub in central Istanbul, which killed at least 39 people, by my count Turkey has suffered 33 major terror attacks since summer 2015. These attacks, which have killed more than 730 people, are connected to two terror groups: ISIS and the Kurdistan Workers Party, or PKK.

No one has claimed responsibility for the New Year's Eve attack in Istanbul, but it would not be surprising that ISIS were behind this attack. For weeks now, Islamists in Turkey had argued that New Year's Eve celebrations are un-Islamic.

Shocking as it is in a country with a deep-rooted Christian legacy -- St. Nicholas himself was born in Turkey in the early Christian era -- Islamists have even carried out mock-style executions of Santa Claus in public to protest against New Year's Eve celebrations, which they confuse with Christmas, and to which they object in their distorted ideology.

It would not be surprising if ISIS or jihadist individuals radicalized by ISIS carried out last night's heartbreaking New Year's Eve attack in Istanbul.

Fighting each other, not terrorists

But if the perpetrators of Turkey's terror are so obvious, why does Turkey seem unable to prevent the tide of terror that it is facing? This is because the Turks are too busy fighting each other, rather than focusing on fighting terror together.

Since coming to power first as prime minister in 2003 and then as president in 2014, Erdogan has won elections on a platform of right-wing populism. He has demonized, targeted, and brutally cracked down on electorates that are not likely to vote for him.

These groups, including leftists, liberals, social democrats, Alevis (who are liberal Muslims), secularists and Kurds, together constitute nearly half of the country's population.

Erdogan's strategy has left Turkey deeply polarized. And coupled with Turkey's economic growth under Erdogan, it has built him a loyal, right wing constituency, including Turkish nationalists, conservatives and Islamists, constituting the other half of the country.

This is also the prism through which Turks, unfortunately, view the terror attacks and the rising violence.

How to prevent tide of violence?

Following each attack, instead of discussing the security failures that may have led to the attack and what can and should be done to prevent future attacks, the Turks start blaming each other.

Nor is there ever any discussion on the foreign policy picture behind the attacks, namely that Ankara's simultaneous wars against ISIS and the PKK ally Party for Democratic Unity (PYD) in Syria appear to be spilling over into the country, with ISIS and the PKK carrying out retaliatory-style attacks because Turkey is making gains against them in Syria. 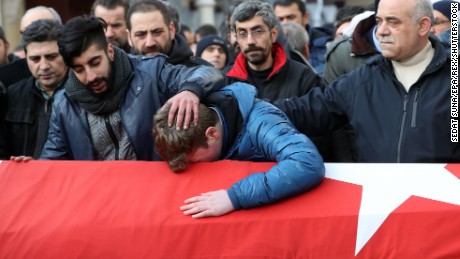 Instead, Turkey's polarized landscape shapes the debate in the country in the aftermath of each attack.


Turkey has strong national security institutions, which have helped it weather previous terror waves, including a full-blown PKK insurgency in the 1990s. The same institutions have also helped the country avert past crises, such as civil war-like fighting on the streets between hard-right and hard-left groups in the 1970s.READ MORE: A bloody end to a grim year

But, if the Turks do not engage in an honest conversation on how to prevent the tide of violence facing them this time, I fear even these